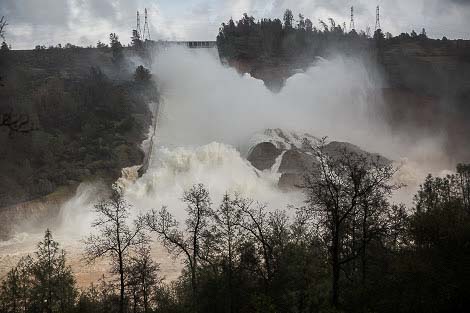 A recent image of a Californian dam experiencing problems. Dams do fail and when they do, casualties can be high. The pro-nuclear folks say reactor risks – the actual deaths over half a century, even allowing for Three Mile Island, Chernobyl, and Fukushima – are dwarfed by dam risks, let alone coal risks. As an ex-actuary, I’m partial to numerical calculations, but all my reading of the voluminous writings in the “field of energy risks” hasn’t put me fully in sync with that judgement.

You see, I can’t help but feel that the ordinary person in the street is right to be scared of reactors. Often they’re frightened not because they’ve evaluated risks but simply by association with mushroom cloud images. That doesn’t mean they’re wrong. The antinuclear folks can exaggerate certain reactor risks, but the scariest risk, that of meltdown and mass radiation release, seems to me to be terrifying for all the right reasons. Maybe that risk is one of Nassim Nicholas Taleb’s “black swan” events, very rare but horrendous in outcome. Who knows what the next meltdown, assuming there will be one, will bring?

No wonder I love my work. How hard to make up one’s mind, yet how endlessly fascinating!