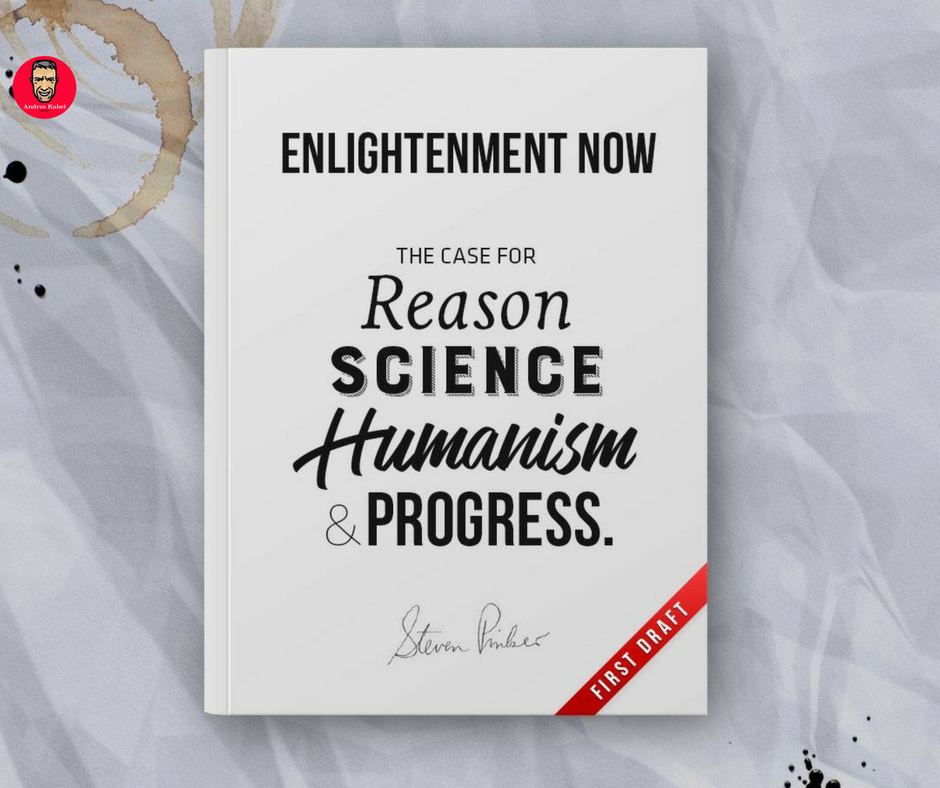 One slab of reading for this holiday proved to be far more demanding than anticipated. I took along Steven Pinker’s “Enlightenment Now: The Case for Reason, Science, Humanism, and Progress” because it seemed to be an easy read, in an area of interest, by an engaging writer. Well, engaging he is, but the topic quickly deepened into murkiness for me and I had to force myself to follow his detailed, if spirited arguments. So, two months later, I’m done and persistence has paid off.
Pinker expertly sums up the Enlightenment, flowering from the 18th century, as espousing reason, science, humanism, and progress. Reversing the order of these four cornerstone beliefs, a great slab of the book is spent reprising and updating his earlier work, claiming that the Enlightenment’s key promise, of ongoing progress, has been fulfilled spectacularly. His debunking of modern negativism about “progress” chimes well with me, though he is far too blithe about climate change impacts. Then he attacks modern-day populism, Trumpism in particular, by arguing robustly for continued emphasis on reason and science.
Finally he addresses moral philosophy by advocating humanism, which is close to my heart. “Though the moral and intellectual case for humanism is, I believe, overwhelming,” he writes, “some might wonder whether it is any match for religion, nationalism, and romantic heroism in the campaign for people’s hearts. Will the Enlightenment ultimately fail because it cannot speak to primal human needs?” He remains confident humanism will hold sway. “Still,” he cautions, “the appeal of regressive ideas is perennial, and the case for reason, science, humanism, and progress always has to be made. When we fail to acknowledge our hard-won progress, we may come to believe that perfect order and universal prosperity are the natural state of affairs, and that every problem is an outrage that calls for blaming evildoers, wrecking institutions, and empowering a leader who will restore the country to its rightful greatness.”
I’m inspired. Advocating the logicality of reasoning, championing science against superstition or nihilism, and grounding my ethics in humanism are my blueprint. If I’m not nearly as blithe as Pinker about overall human progress, his book at least acts as antidote against the often mindless negativism I see around me.