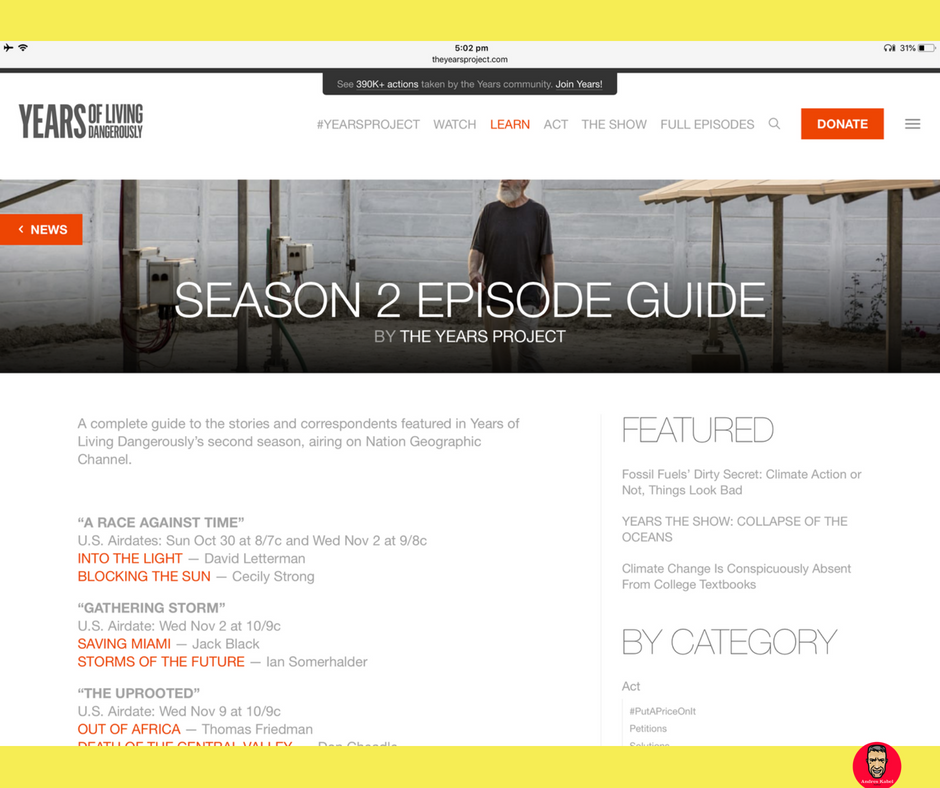 Watching climate change truth is as difficult as wrestling with existence: you need to do it but the further you go, the greater the terror. As well as reading two fine books over this trip, I’ve forced myself to watch Season 2 of “Years of Living Dangerously.” Not fun, not fun at all, but let me commend the series to you.

A snapshot of the eight episodes is all you need. In Episode 1, David Letterman tours India, destined to ramp up disastrous coal-fired electricity, and actress Cecily Strong reveals how American utilities use all means to delay rooftop solar. Jack Black, in Episode 2, is riveting as well as entertaining while exploring Miami, a city seemingly oblivious to a future under water, while Ian Somerhalder tracks another scientist-hero, geologist/geophysicist Jeff Donnelly, in extracting deep sea cores to learn about past hurricane incidence/severity. Tom Friedman of the NYT is his usual compelling self in Episode 3, investigating the beginning of mass climate refugee movements, and Don Cheadle looks at California’s worst-in-1,200-years drought. Episode 4 is marred by Arnold Schwarzenegger pursuing a silly topic but supermodel Gisele Bundchen shines while investigating Amazon deforestation due to mankind’s meat binge.

I was especially interested in actor Ty Burrell’s Episode 5 examination of electric cars and their promise when coupled with automation and ride-sharing.; actor Brad Whitford looks at the push to compel Republicans to see climate reality. In Episode 6, Joshua Jackson reveals how the oceans are slowly but surely warming and acidifying disastrously (cue our very own Great Barrier Reef). Actress Nikki Reed lucidly looks at the carbon tax solution in #7, while journalist Aasif Mandvi digs into the vanishing of species. Episode 8 sees America Ferrera putting the immoral US coal industry under the microscope, and Sigourney Weaver mesmerises with a narrative that says China has, over the last half decade, switched towards a clean energy future commitment.