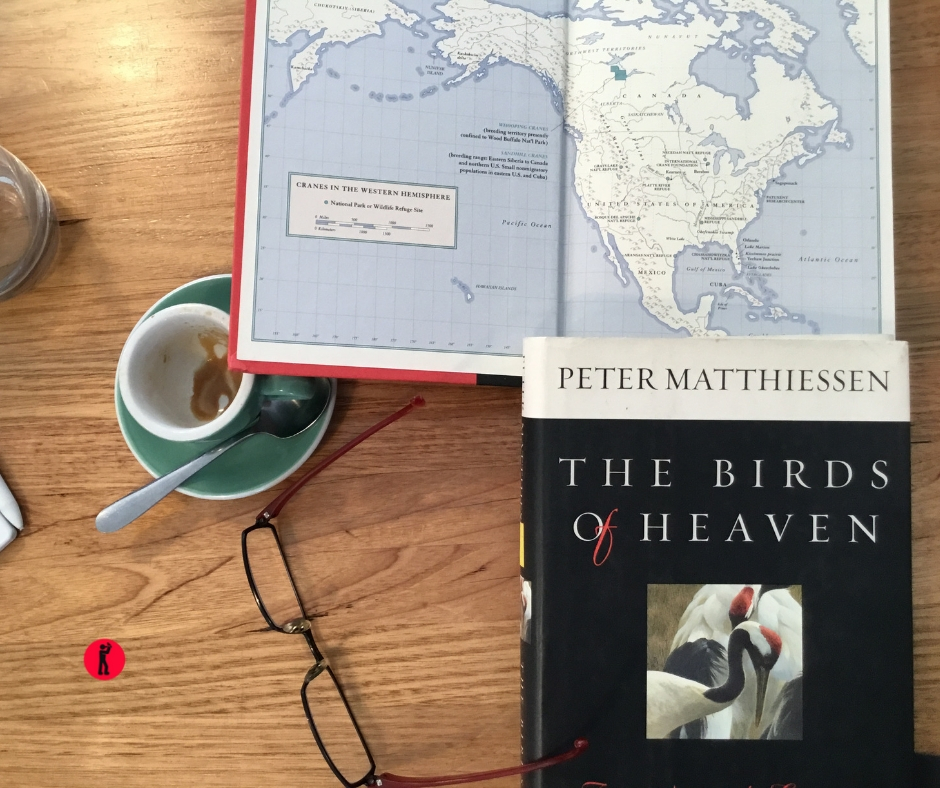 Let’s zero in on this exploration of what a bird is. What is a crane? With only fifteen species, I’ll see what I can do as fast as I can. A summary, that’s what I’m after. The go-to book (though not necessarily the best kind-of-textbook; we shall see) is The Birds of Heaven: Travels with Cranes by legendary naturalist and novelist Peter Matthiessen. This hardcover, which I bought when it came out in 2001, is one of my few remaining physical books.

First things first: 11 of the 15 are of the species Grus, 2 are Anthropoides, 2 are Balearica. 14 of the 15 are called “crane,” while Australia’s predominant species is the Brolga. Andres, memorise, please.

The first notable in the book is a map inside the front cover, “Cranes in the Western Hemisphere,” which is essentially North America and some of Greenland and Siberia (why isn’t South America included?). Only two cranes appear, the Whooping Crane, shown as breeding only in a Canadian national park; and the Sandhill Crane, of which Matthiessen says it breeds from Eastern Siberia to Canada and northern USA, plus a few permanent populations shown down eastern U.S.A. The map shows eight protected sites and six other locations with unfamiliar names.

Inside the back cover is the flip map, “Cranes in the Eastern Hemisphere,” which is far more busy. Europe has the Eurasian Crane (or the Common Crane, the one we probably noticed in kids’ books), possibly more in the Urals than in the populous areas. Africa has the Black-Crowned Crane up in the northwest, in countries I know nothing about; the Gray-Crowned over in Ethiopia and down south; the Wattled all through the south and east; and the Blue only in Botswana. Australia has the Brolga (this is the only crane I’ve seen!) and up in the remote north, the Sarus Crane. The Siberian Crane is where you’d think it is. Mongolia is where you’ll find the Demoiselle (what a name!), go to Afghanistan or Nepal for the Black-Necked, the Hooded is near Lake Baikal in most remote Siberia, and the White-Naped seems to be in most northern China. The only crane I’ve read a little about, the Red-Crowned Crane, is in a couple of spots, north and south, in Japan. Confusingly, this map says “winter ranges not indicated” (more complexity!) Triumph! After an hour, I now know something. If I’m bored tonight, I can memorise and mentally recreate maps. Tomorrow: how many of each of these 15 species fly the skies of the world?