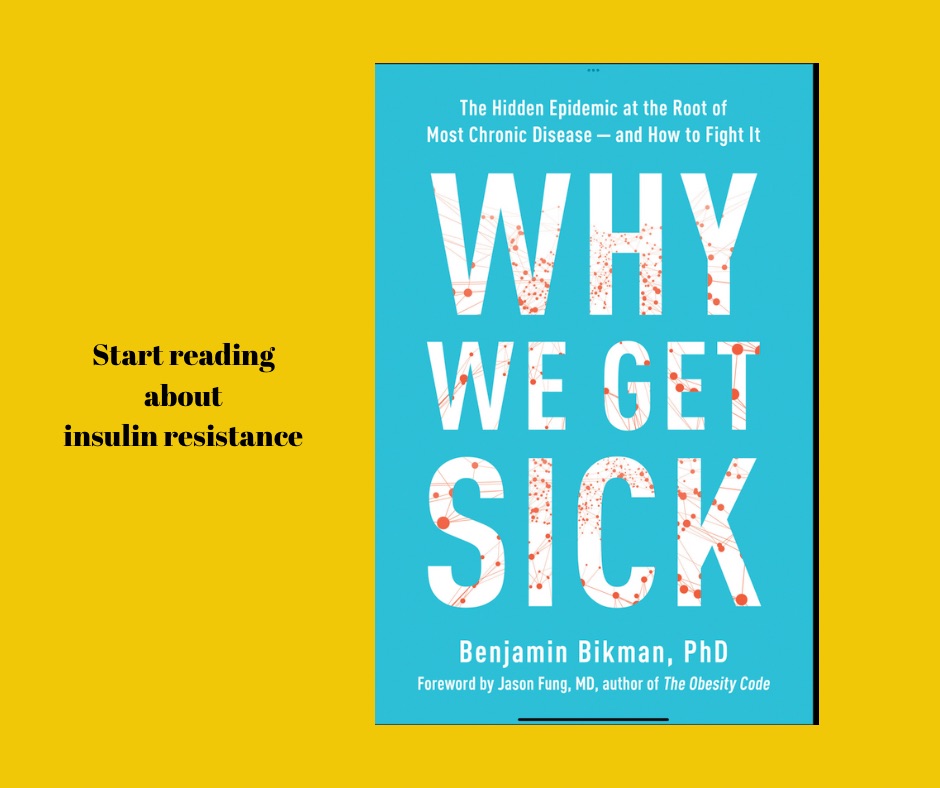 Daily more-than-usual attention to something called “health” is not straightforward, at least not to me. Two days ago, I set myself, on my second Health Big Year day, a basic task of volition, calling it “salad.” Yesterday, a day of travel, didn’t offer anything as easy, so instead I turned to another Big Year activity, that of self-education. If I can’t make an actual impact today, let me reach for half an hour (no more, we don’t have time for more!) of reading about the mysteries of health.
And mysteries abound in spite of the confidence of most people about “how to be healthy.” It’s easy to see that such confidence is nonsensical because “most people” disagree with each other.
So let’s start with Why We Get Sick: The Hidden Epidemic at the Root of Most Chronic Disease – and How to Fight It by Benjamin Bikman, a metabolic scientist and author. First off, it’s clear Bikman has a unifying theory on modern human morbidity.
In my allotted half-hour, here’s what I think he’s saying: we eat way too much processed carbs (in particular sugars); our insulin levels spike too often; cells that need insulin to deliver energy start to resist so much insulin; the body produces more insulin to compensate, setting off a bad cycle: and (here’s the theory) all those affected cells break down or do unhealthy things; at the same time, too much insulin floats around in our blood and causes damage.
And the consequence is described by Jason Fung (a kidney specialist and author of clearly related titles like The Obesity Code, The Diabetes Code, and The Cancer Code): “The top two causes of death, as well as five of the top seven causes (heart disease, cancer, cerebrovascular disease, Alzheimer’s disease, and diabetes), are related to chronic metabolic diseases. … You’re about to learn that a lot of it comes down to one root cause: insulin resistance and hyperinsulinemia (meaning too much insulin in the blood).”
My health scare related to heart disease, so that’s why I’m vitally interested in Bikman’s theory. But also if insulin resistance leaves me vulnerable to cancers, stroke, or Alzheimer’s, what can be more important than sorting this out intellectually (and then via action)?